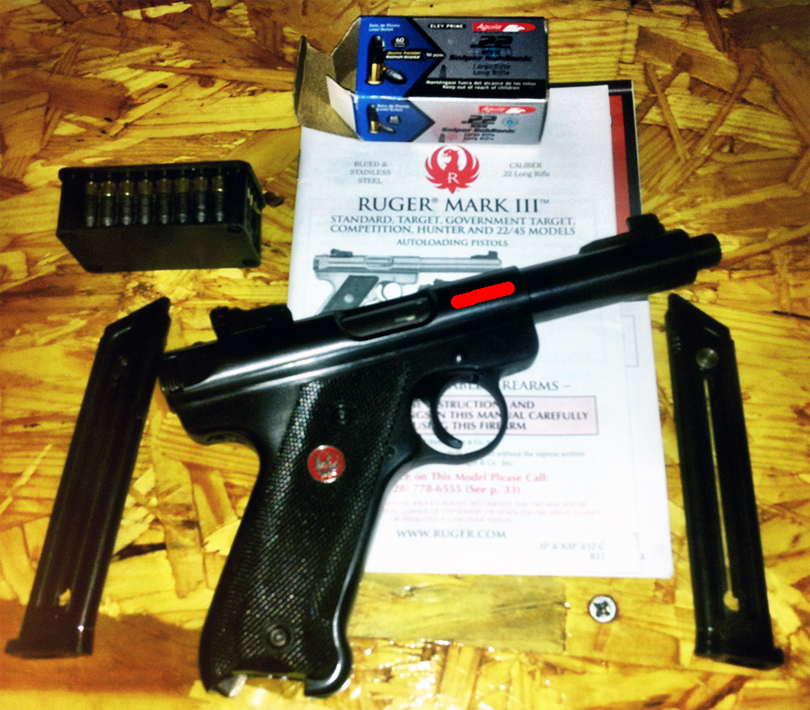 Picked up the Ruger MK III from the gun smith today.
I had originally ordered the 22/45 and had paid for the 22/45 - paid in advance to get the barrel chopped and threaded for the suppressor - but he delivered to me a steel frame MK III and no charge difference. I won't complain about that a bit - because when the suppressor is attached to this, the steel frame tends to balance out the weight a bit more than the 22/45 would. Still waiting on the ATF to process the damn paperwork for the suppressor so I can pick it up as well. And since I bought several dozen boxes of sub-sonic .22lr before the rush, I'm set for ammo for quite a while with this.

But I do have a few questions:

Obviously, in a real world situation or in a PAW (Post Apocalyptic World) situation, this thing would be used between 0 to 50 feet. At least that is my general thoughts.
So, keeping in mind that it is suppressed, isn't to be used more than 50 feet away from its target, and that it is a .22 (but will be using the 60 grain subsonic rounds) - what is a very accurate, yet rapid target acquisition optic for this set up? I can easily remove the irons and replace with a rail...
Those who make peaceful revolution impossible will make violent revolution inevitable.
--John F. Kennedy
Top

There has been a question raised that I need some input on. Apparently, subsonic ammo will not stabilize, especially in such as short barrel as this. I am now worried about a baffle strike inside the suppressor when using subsonic ammo.

The suppressor I purchased is for 5.56 It is the YHM 3500A Quick Disconnect. The flash hider/adapter is 1/2 x 28 standard thread - so I had the Ruger MK III cut for that also.
With the addition of a second adapter indexed onto the Ruger, I could detach the can from the AR and move it to the Ruger. As we know a 5.56 is 0.224 OD and a .22lr has an od of .222. So a .22lr will fly through the suppressor for a 5.56 easily. However I had not considered the stabilization issue with subsonic ammo.

Given that there is a slightly larger diameter opening for the 5.56 suppressor and being used on a .22lr - do you think a baffle strike would be imminent in that situation?

Also - in the manual it DOES say that damage caused by subsonic ammo is not covered in the warranty: 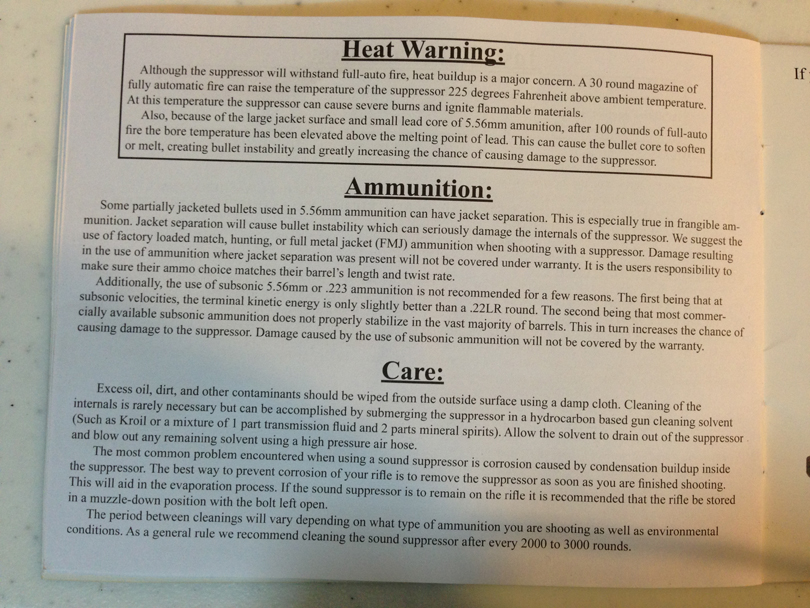 But again, using a larger diameter suppressor that is designed for 5.56 on a 22.lr - would that help avoid the issue?
Those who make peaceful revolution impossible will make violent revolution inevitable.
--John F. Kennedy
Top

I don't know the answer to this question, but isn't the manual there talking about stabilizing subsonic 5.56?